India Gate Delhi Timings Entry Fees Location Facts: The India Gate is located in the center of New Delhi, the capital of India. It was made by Edwin Lutyens In 1921. This landmark in Delhi commemorates the members of the erstwhile British Indian Army who sacrificed their lives fighting for the Indian Empire in the Afghan Wars and World War.After India got its independence, India Gate became the site of Amar Jawan Jyoti -Indian Army’s Tomb of the Unknown Soldier. It is counted among the largest war memorials in India.

The Shrine of the Amar Jawan Jyoti is burning since 1971. It represents the flame of the immortal warrior that marks the Tomb of the Unknown Soldier. The shrine is made of black marble with a rifle placed on its barrel. This rifle is crested by a soldier’s helmet. The words- “Amar Jawan” (Immortal Warrior) is inscribed in gold on each face of the cenotaph which is placed on an edifice. The edifice has four torches on its four corners, these torches are kept alive.This shrine of the India Gate in Delhi was uncovered on January 26, 1972 by the Prime Minister of India during that time- Indira Gandhi. Since then, it is customary for the President and the Prime Minister to pay homage at the site during State ceremonies. Even while guests visit the state, they come here to visit the India Gate in Delhi India and pay homage at the site. READMORE:Best Places for a Long Weekend around the World

Open On: All days, (at times closed during Republic Day, Independence day due to security purpose) 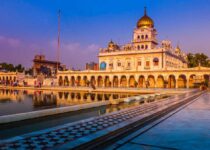 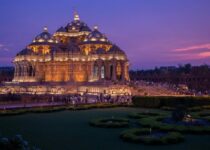